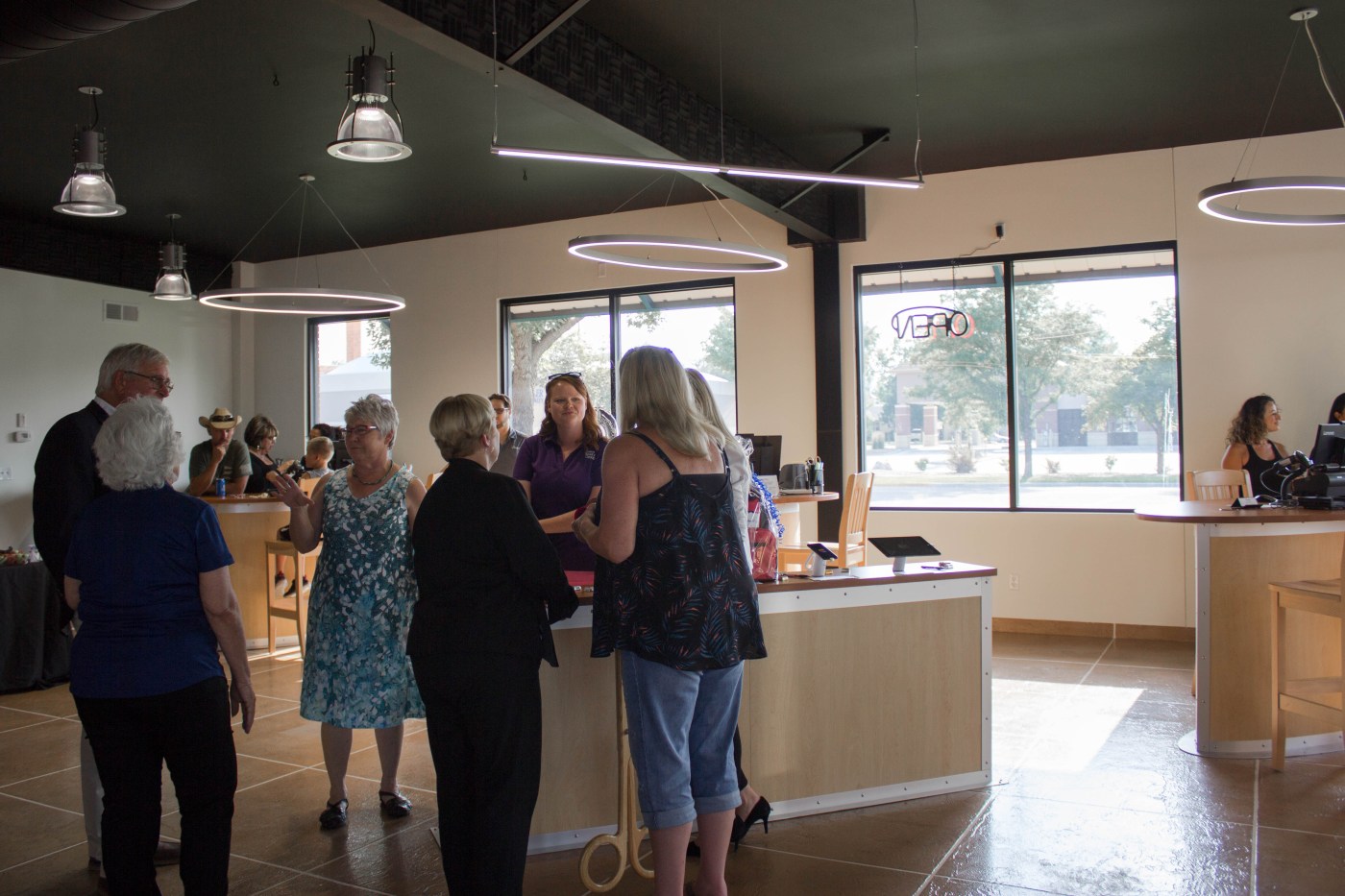 Businesses and organizations in downtown Fort Morgan will once again host the artwork of local and regional artists as part of the Downtown Fort Morgan Third Thursday Art Walk from 4-7 p.m. on Thursday, June 16, 2022. This map lists the stops for the Third Thursday Art Walk in downtown Fort Morgan on June 16, 2022. (MCC CACE/Courtesy Graphic) Those who choose to take the self-guided tour of eight downtown locations will be able to view the work of art and can also learn about the artists’ techniques, materials and themes. Some places may offer light snacks. Stops include: Viaero Wireless at 100 E. Platte Ave., Coates Realty Group at 114 E. Platte Ave., Furniture Mart at 505 Main St., Fort Morgan Library/Museum at 414 Main St., Zazzy Cafe at 119 W. Beaver Ave., CACE Gallery of Fine Art at 300 Main St., The Art Spot at 109 W. Kiowa Ave. and The Better Sleep Store at 220 Main St. Art Walk organizers encourage Art Walk participants to wear masks and use social distancing practices for personal protection. Here’s a step-by-step rundown of what you can expect at this month’s Art Walk: 1. Viaero Wireless, 100 E. Platte Ave., will feature mixed media art by Lizz Medrano. 2. At Coates Realty Group, 114 E. Platte Ave., will be Pam Brown’s watercolors. 3. At the Furniture Mart, 505 Main St., there will be acrylic window paints by Maria Cismowski. 4. At the Fort Morgan Library and Museum, 414 Main St., there will be a continuing exhibit in the Lower Gallery “Awakening Stories of Ancient Bison Hunting” as well as a special free interactive archeology program for children from 4:00 pm to 6:45 pm with library/museum educator Kathleen Byrne. 5. At Zazzy Cafe, 119 W. Beaver Ave., there will be mixed media artwork by Frances Johnson. 6. At the CACE Fine Arts Gallery, 300 Main St., will be portrait artwork by Joshua McKenzie. 7. At The Art Spot, 109 W. Kiowa Ave., there will be acrylic paintings, quilts and photography by Darlene Ruyle and mixed media by DeAnn Jones. 8. At The Better Sleep Store, 220 Main St., there will be acrylic paintings and collages by Sandy Schneider-Engle. For additional information on the Third Thursday Art Walk in Downtown Fort Morgan, contact [email protected] Interactive children’s archeology program during Art Walk Fort Morgan Library and Museum will offer a special exhibit, “Awakening Stories of Ancient Bison Hunting,” in the lower gallery beginning June 1 and related programs June 16 and July 21 . (City of Fort Morgan/Courtesy Graphic) During the Art Walk, Fort Morgan Library/Museum educator Kathleen Byrne will host an interactive children’s archeology program in the museum’s lower gallery. The program with a series of activities related to archaeology, history and art will take place from 4 to 6:45 pm on Thursday, June 16. This program will also be offered during the Art Walk on Thursday, July 21. These programs are in conjunction with the Lower Gallery exhibit “Awakening Stories of the Ancient Bison Hunt,” which will be on view through July 31. Those who visit the Lower Gallery during the Art Walk and join this program can “see and touch real Native American artifacts” from the Fort Morgan Museum’s Plains Indian Discovery Kit, according to a news release from the city of Fort Morgan. Kids can “get a taste of archeology with a fun hands-on experience that requires chocolate chip cookies,” and all visitors can “learn a little about ancient bison hunting” as they move through the special exhibit. This program is free to the public and does not require registration. For more information on the interactive archeology program, please contact Kathleen Byrne at 970-542-4014 or [email protected]

Lauren Frihauf, a Wiggins native with ties throughout Morgan County, will release a new single on Friday, June 17 – The Fort Morgan Times 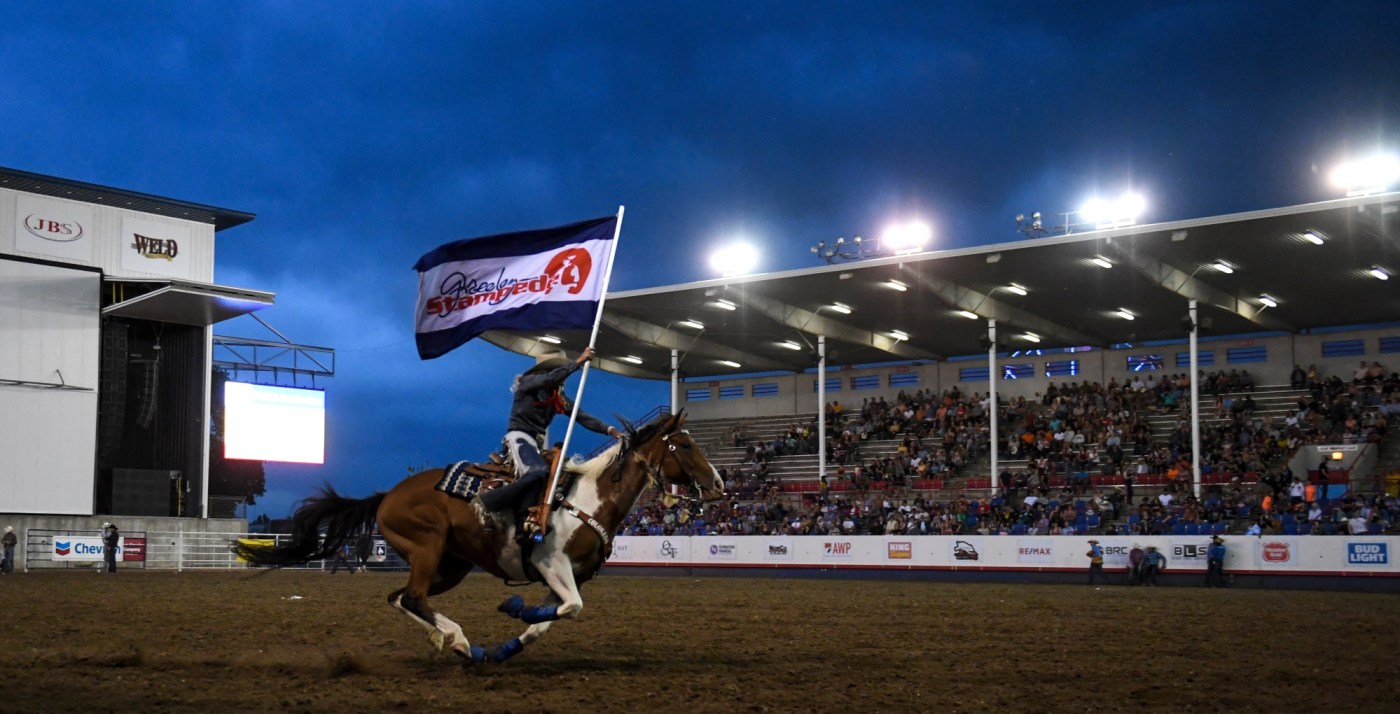 The PRCA Rodeo concluded its qualifying events on Wednesday night with First Aid Night. Representatives from the Greeley Police and Fire Departments and the Banner Health Ambulance Program were greeted with cheers from audience members in the stands. Representing the Greeley Police Department was Sgt. Matthew Patella and Police Chief Adam Turk, who recently had the “interim” tag removed from his title. Battalion Chief Jason Oster and Fire Chief Brian Kuznik were on hand for the Greeley Fire Department, while EMT Jacob Kennedy and Paramedic Stacey Chase proudly represented Banner Health. The Weld County Sheriff’s Department arrived at the arena in their Search and Rescue MRAP with the leader, Sheriff Steve Reams, in the lead. Returning to her homeland, Miss Rodeo America Hailey Frederiksen brought the colors to the arena on horseback as Gerry McFarling sang the national anthem. The rodeo bareback had only three participants because most of the cowboys scratched themselves. The evening resulted in two trips: Shane O’Connell of Rapid City, SD, scoring an 85-point trip at Nutrena’s Rustler and Drake Amundson of Laramie, Wyo., scoring a 70-point trip at Nutrena’s Pebbles. GREELEY, CO – JUNE 29: Cowboy Garrett Buckley, of Craig, reacts after being challenged by bronc 017 Al Capone while riding saddle bronc on day five of the PRCA ProRodeo series during the 100th Greeley Stampede at Island Grove Regional Park in Greeley on June 29, 2022. (Alex McIntyre/Team Photographer) It was a tough night at the office for steer wrestlers. Broken barriers, bad jumps, and cunning maneuvers that caused challenges for the hazers were just some of the things that caused the event to see a lack of qualifying times. The fastest time of the night went to Ames, Okla., cowboy Tyrel Cline at 13.9 seconds, including the 10-second penalty for a broken gate. Mead’s Chism Docheff came in second with a time of 15.5 seconds. Docheff also had a 10-second penalty for a broken barrier. In the team ropes competition, Mississippi boys Marcus Theriot and Cole Curry cemented their spot in the final with a time of 6.3. The team of Hayes Smith of Central Point, Oregon, and Cullen Teller of Ault would have advanced to the final had it not been for a 5-second penalty for catching a leg during their run. The duo walked away with a total score of 10 seconds. Bronc jockey Houston Brown of Miles City, Mont., scored the night’s highest score of 83 at Ridge Walker. Jacob Kammerer from Phillip, SD came in second with a score of 81 on Nutrena’s Full Deck. Wade Brown from Norco, California had an amazing ride on Goodness Gracious. Despite the horse’s odd kicking pattern, Brown held on but was disqualified for not adhering to the scoring rule. GREELEY, CO – JUNE 29: Cowboy Wade Brown, of Norco, Calif., rides a saddle bronc but a penalty gives no score on day five of the PRCA ProRodeo Series during the 100th Greeley Stampede at Island Grove Regional Park in Greeley June 29, 2022 (Alex McIntyre/Team Photographer) As the riggers prepared for their competition, the wind in Greeley was whipping and clouds were closing in fast. the grandstands to protect themselves from the pouring rain and stormy wind. While some people worked to get out of the wind and rain, the rough weather proved to be fruitful for barreler JW Winklepleck, who found two $20 bills flying from the stands onto the arena floor. The sudden change in weather proved to be a challenge for the ropers with La Junta’s Ryan Belew winning a time of 12.6 seconds. Wind and rain did not deter the ladies from escaping. Tiffany Schieck of Floresville, Texas was on fire with a time of 3.1 seconds, followed by Morgan Kessler of Callaway, Nebraska with a time of 3.8 seconds. Overturned barrels seemed to be the theme of the night for the ladies barrel racers with five contestants being penalized for overturning the metal drums. Cowgirl Reagan Laney of Granbury, Texas posted the best time of the night at 17.14 seconds. Wednesday’s bull riding event saw the highest scoring of the entire qualifying series from JR Stratford, Byers, Kan., riding Dale Yeah. The Kansas cowboy scored an impressive 88.50, besting Spencer Wright’s Sunday night performance of 85 points on Game Changer. Jace Troxclair from Chauvin, Louisiana scored 86 points on Black Panther. GREELEY, CO – JUNE 29: Magic in Motion stunt rider Madison MacDonald performs in the pouring rain on day five of the PRCA ProRodeo series during the 100th Greeley Stampede at Island Grove Regional Park in Greeley on June 29 2022. (Alex McIntyre/Staff Photographer ) The event was paused for a moment when a bull, Mt. Everest, decided to give the collectors and cowboy protection gear their money by refusing to return to the pen area. The bull charged the horses, dodged the ropes and caused the cowboy protection team to throw themselves onto the rails despite the team’s best efforts to corral the great beast. Finally, after successfully tethering the bull, a collector towed the irregular animal to the holding pen behind the chute area. The PRCA Rodeo series is scheduled to conclude Thursday at 7 pm with the top 12 finishers from each event going head-to-head to win the 100th Greeley Stampede and secure bragging rights, prizes and money. The 100th Greeley Stampede will run through Monday, July 4 with live music, a carnival, fairground food, an art exhibit and more. For more information on daily events, tickets, parking and more, visit www.greeleystampede.org. GREELEY, CO – JUNE 29: Cowboy Darnell Johnson, of Fowler, ties up the steer with a tie-down time of 6.7 seconds on day five of the PRCA ProRodeo Series during the 100th Greeley Stampede at Island Regional Park Grove in Greeley on June 29, 2022. (Alex McIntyre/Staff Photographer) 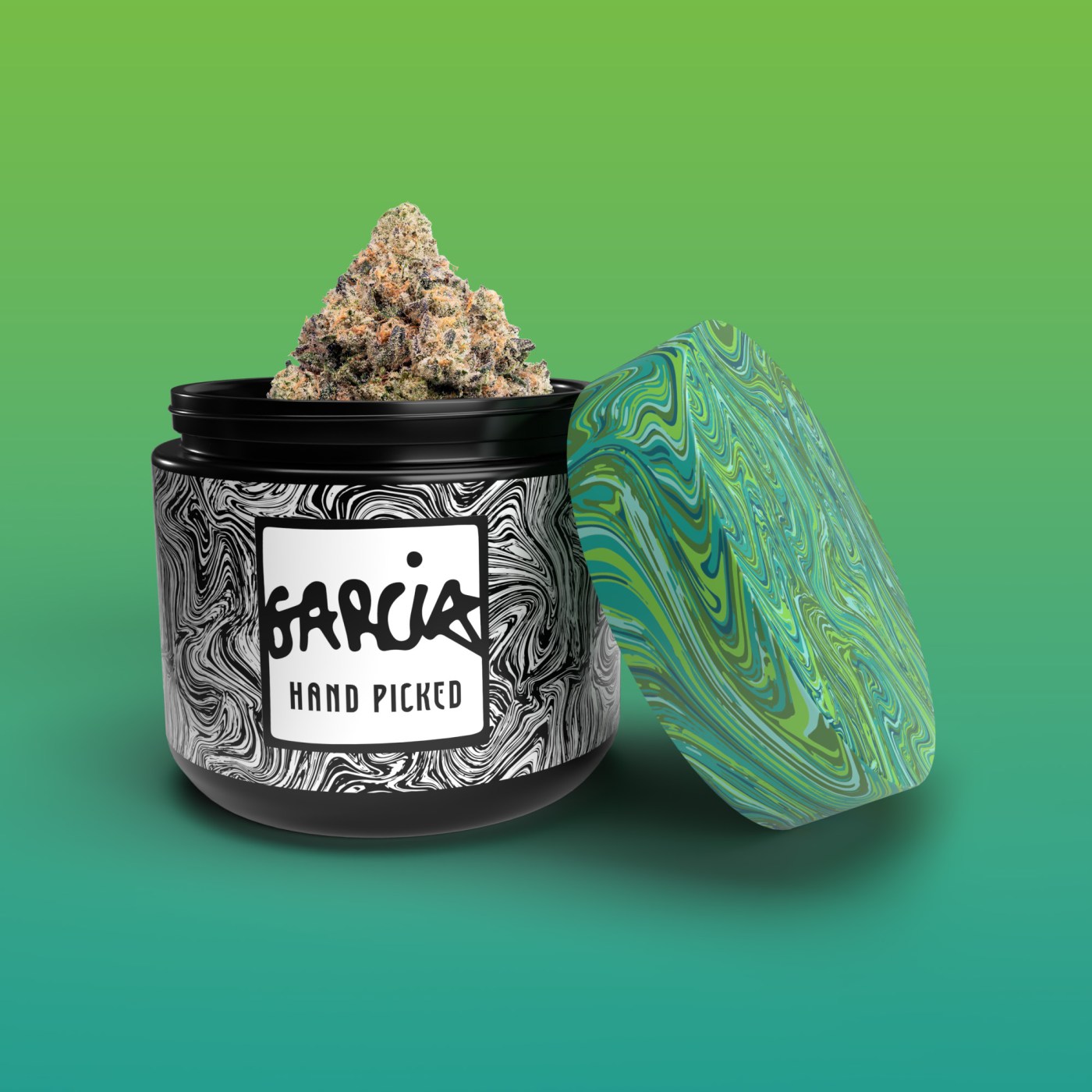 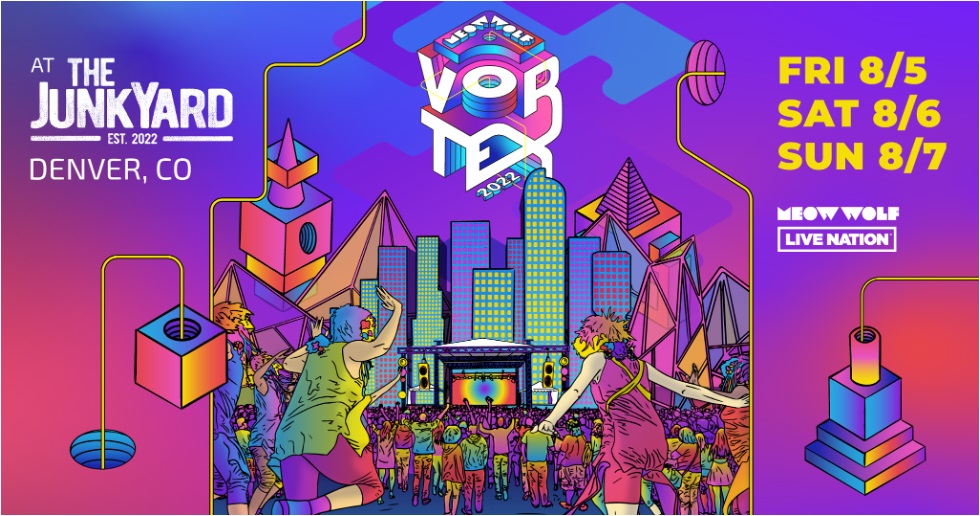